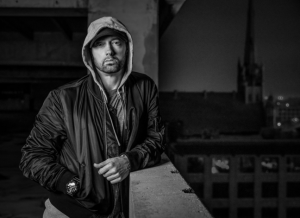 Fifteen-time MTV EMA winner Eminem will make a highly anticipated return to the EMA stage for the first global performance of his new single “Walk on Water” LIVE at the 2017 MTV EMAs.

This marks Eminem’s fourth EMA performance as he returns to the show in London, following his surprise performances of “Berzerk” and “Rap God” that dominated the night at the 2013 MTV EMAs in Amsterdam where he was honored with the night’s esteemed Global Icon Award and also took home the title for “Best Hip Hop” artist.

Eminem is nominated for two categories at the 2017 MTV EMAs, “Best Hip Hop” and “Best Live.”

He has sold more than 155 million albums worldwide.

“With 35 EMA nominations and 15 wins under his belt, Eminem is no stranger to the EMAs and we’re thrilled to announce his highly anticipated debut will take place at our biggest night in music,” said Bruce Gillmer, Head of Music and Music Talent, Global Entertainment Group, Viacom and executive producer of the 2017 MTV EMAs.

The 2017 MTV EMAs, one of the biggest global music events of the year that celebrates the hottest artists from around the world, will broadcast to MTV channels worldwide from The SSE Arena, Wembley in London on Sunday, 12 November at 8:00pm GMT*.

The official sponsors of the 2017 MTV EMAs are Daddy’s Home 2, hmv and Aussie Hair.

#LondonIsOpen is a major campaign – launched by the Mayor, Sadiq Khan – to show that London is united and open for business, and to the world, following the EU referendum. It shows the world that London remains entrepreneurial, international and full of creativity and possibility. It reassures the more than one million foreign nationals who live in London that they will always be welcome, and that any form of discrimination will not be tolerated.

The MTV EMAs 2017 will broadcast LIVE across the globe on Sunday 12th November at 8pm GMT** from The SSE Arena, Wembley in the London Borough of Brent. One of the biggest global music events of the year that celebrates the hottest artists from around the world, the MTV EMAs bring music fans a unique, multi-platform experience across MTV’s global network of more than 60 channels and over 300 digital media properties and platforms. Follow @MTVEMA on Facebook, Twitter, Snapchat and Instagram, and join the conversation with #MTVEMA. Fans are invited to participate in the MTV EMAS 2017 campaign using MTV Bump. Bruce Gillmer and Richard Godfrey are Executive Producers for the MTV EMAs 2017. Debbie Phillips and Chloe Mason are Producers. **Check local listings.