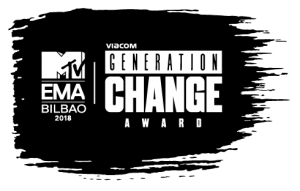 Bilbao, Spain – October 23, 2018 – Viacom’s (NASDAQ: VIA, VIAB) MTV today announced the first-ever “MTV EMA Generation Change Award” to elevate and empower the fearless, original young people who are changing the world.  Five changemakers from around the globe, all under the age of 26, are nominated for the award, which will be presented during the “2018 MTV EMA” red carpet pre-show in Bilbao, Spain on November 4th.

The nominees are among a generation of young people who are tackling the world’s toughest problems through music, storytelling or digital media. MTV International will elevate each powerful story across the brand’s social and digital platforms in nearly 180 countries, and ask fans to support each changemaker’s cause by posting #MTVEMA combined with the nominee’s hashtags included below on Twitter and Instagram beginning today through October 30, 2018 at 11:59pm CET to help them win the “MTV EMA Generation Change Award.”

An advocate for child rights, Mohamad built a school in a refugee camp in Lebanon to give children access to an education, all while using the power of storytelling to shine a light on their realities in the wake of an ongoing war.

A climate activist, hip-hop artist, and powerful voice on the front lines of a global youth-led environmental movement.

A bold changemaker who founded a movement of love, hope and support to give mental health a voice in Nigeria.

According to Viacom Consumer Insights, over 95 percent of young people globally believe it’s important to collaborate with other young people to make the world a better place, and four in five believe their age group has the potential to change the world for the better.*

Viacom’s Generation Change is an audience-inspired and audience-led global initiative designed to elevate and empower young people driving change around the world. Built to be fluid, Generation Change will be tailored by brand and by market, and informed every step of the way by young agents of change who are passionate about making a difference.

Learn more about the “MTV EMA Generation Change Award” nominees in the bios included below, and in this video.

Sonita uses her rap lyrics and powerful voice to help end child marriage and inspire people everywhere to dream bigger dreams. Sonita was born in Afghanistan under the Taliban regime, but grew up as an undocumented refugee in Iran. She twice escaped being sold as a child bride – a tradition rooted in gender inequity that stretches across cultures worldwide. Though rapping was illegal for her as a girl in Iran, music became her outlet for expression and for hope. One of Sonita’s first music videos, “Daughters for Sale,” powerfully brought voice to the silent pain of so many of her friends experiencing child marriage. Fast forward to now, after coming to the US on scholarship: Sonita is a high school graduate and, in partnership with the non-profit Strongheart Group, an international spokesperson for the rights of girls to choose their own destiny. Part of Sonita’s story has been told in the award-winning documentary, SONITA.

Sonita Alizadeh on child marriage and empowerment: “Child marriage devastates the potential of 12 million girls every year. I want every young person to be able to have dreams. When young people feel that they can be brave and bold in their lives, they can actually change the world.”

Mohamad grew up in Syria, but fled for Lebanon when life became too dangerous. Like thousands of other refugee children, he couldn’t go to school. He wanted to do everything he could to make sure this would not happen to the younger children. He set out to make a difference and, despite of the difficult circumstances he was living in, he and his family built a school which has now grown to host 200 children.  A natural storyteller, Mohamad has created two powerful documentaries that shine a light on child refugees’ lives, and their struggle to find their identity in the wake of an ongoing war that has altered their lives forever. In 2017, Mohamad won the International Children’s Peace Prize for his exceptional dedication to stand up for the rights of children.  Currently living in Sweden, he recently founded an NGO to build awareness of the issue in Lebanon, and to give the Swedish people an easy way to support the school he built and help them to understand the situation.  He also launched a new initiative called Tellurian, which supports youth projects in the country,  the integration between newcomers and citizens and introduces activism to the community.

Mohamad Aljounde on child refugee rights: “My work means everything to me because I believe that every child has the right to education and the right to improve their lives and their future. No one  is more important than the young children, since they are the future.”

Jones, a campaigner and creator with a focus on LGBTQ+ rights, mental health and disability, is the creator of a YouTube series called “Queeries” where she and a guest explore audience submitted questions dealing with difficult questions in a light-hearted, accessible way.  Her videos spark conversations around topics including sexuality, mental health, race and gender identity, to name a few.  Jones was also named Stonewall’s Young Campaigner of The Year after running successful campaigns tackling LGBTQ+ inequality in schools and online.  Her new podcast “Never Read The Comments” explores the ways in which social media can be used to affect positive social change.

Ellen Jones on youth activism: “Whether it’s raising a profile on Instagram or launching a campaign…or joining a local charity, there are so many ways to get involved and it’s all enough, it’s all something, and it can all make a difference.”

Martinez is an indigenous climate activist, hip-hop artist, and powerful voice on the front lines of a global youth-led environmental movement.  He grew up immersed in the indigenous Aztec traditions of his father, and advocating for social and environment justice with his mother.  At the age of seven, he began songwriting and performing as a means to reflect his world and activate his generation.  He has performed all over the world, and is using his music and voice to get bans on plastic bags, pesticides out of parks, coal ash contained and moratoriums on fracking in his state.  Additionally, he is a lead plaintiff in a youth-led lawsuit against the US government for its failure to protect the atmosphere for future generations.  The Youth Director of Earth Guardians, a tribe of young activists, artists and musicians from across the globe stepping up as leaders to co-create a better future, he has traveled across the nation and to many parts of the world educating his generation about the state of the planet they are inheriting and inspiring youth into action to protect the planet.

Xiuhtezcatl Martinez on reinventing protest: “The urgency of the crisis that we face in our climate and our environment has shown that we don’t have time to conform to traditional methods of protest and activism. Now is the time to get creative with our voices, with our message and with our platform.”

Hauwa is the founder of She Writes Woman, a movement of love, hope and support that gives mental health a voice in Nigeria. Following multiple sexual abuses and a diagnosis of bipolar and post-traumatic stress disorder, Hauwa wanted to make sense of her diagnosis. She sought support groups but couldn’t find any. She was plagued with suicidal thoughts, but couldn’t find a crisis helpline. She took matters into her own hands and launched the first 24/7 mental health crisis helpline and the first anonymous women-only mental health support group in Nigeria  which now has presence in 4 states in the country. Today, Hauwa uses her experience to advocate against sexual violence and stigma surrounding mental health, to ensure that no woman has to live in fear of shame or judgment.  She is the creator of Africa’s walk-in life clinic called Safe Place, which provides support to help alleviate the complex life issues young Nigerians deal with. Hauwa is giving mental health and sexual violence a voice; she is taking back the misinformed narrative and normalizing the mental health conversation in Nigeria.

The 2018 MTV EMAs, in partnership with the movie Overlord, will broadcast LIVE on Sunday, 4th November at 9pm CET from Bilbao Exhibition Centre, Spain. One of the biggest global music events of the year that celebrates the hottest artists from around the world, the MTV EMAs bring music fans a unique, multi-platform experience across MTV’s global network in nearly 180 countries and 450 million homes around the world, connecting with over 350 million fans across all social media platforms. Follow @MTVEMA on Facebook, Twitter, Snapchat (@MTVEMA) and Instagram, and join the conversation with #MTVEMA. Bruce Gillmer and Richard Godfrey are Executive Producers for the 2018 MTV EMAs. Debbie Phillips and Ceire Deery are Producers. Hamish Hamilton is Director. For MTV EMA news, updates and press materials please visit press.mtvema.com.