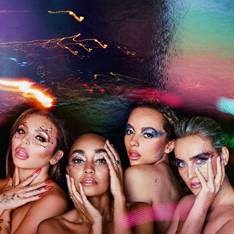 MTV revealed Little Mix as the hosts of this year’s EMA by releasing an animated teaser featuring the band as cartoon superheroes. The animation was created in partnership with the production company Eddy/Blinkink and young French collective Potto and will be broadcast across MTV International regions.

“What an honour! To present the MTV EMA’s is a dream, it’s such a special event.” Said Little Mix, “We’ve always loved watching the spectacular performances and seeing who everyone has voted to win. This year we’ll also be performing our new single ‘Sweet Melody’, our second EMA performance. The show will go on and we can’t wait!”

We’re thrilled to welcome Little Mix, who performed at our 2018 show in Bilbao, back to the EMA Stage,” said Bruce Gillmer, President of Music, Music Talent, Programming & Events for ViacomCBS Media Networks. “Hosting and performing is no small feat, but there is no doubt this powerhouse group will crush it!”

In September, Little Mix launched a brand-new TV series for BBC One, Little Mix The Search. Additionally, they announced  ‘Confetti’, a massive UK and Ireland Arena Tour for 2021. The tour will see Little Mix perform songs from their brand new upcoming album ‘Confetti’, due for release on November 6th, such as the 2020 smash hit ‘Holiday’, written by Jade, Perrie and Leigh-Anne with Kamille and produced by Goldfingers and ‘Break Up Song’, that has so far been streamed 60 million times becoming their 15th UK Official Charts Top 10 hit with 300k UK sales. Additionally, the tour will include some of their greatest hits including ‘Touch’, ‘ Woman Like Me’, ‘Black Magic’ and ‘Shout Out To My Ex’.

The MTV EMAs will be unlike any other as this celebration of global music is shot from multiple locations, including Hungary for the first time ever, and London.  Fans will get an inside look at four iconic locations around the vibrant country of Hungary, the official partner of the “2020 MTV EMAs.”

Official partner of the “2020 MTV EMAs” is HUNGARY.

Voting is open at mtvema.com until November 2nd at 11:59pm CET.

ABOUT THE 2020 MTV EMAs
The MTV EMAs 2020 will broadcast across the globe on November 8th. One of the biggest global music awards shows of the year that celebrates the hottest artists from around the world, the MTV EMAs bring music fans a unique, multi-platform experience across MTV’s global network in 180 countries. Follow @MTVEMA on Facebook, Twitter, Snapchat and Instagram, and join the conversation with #MTVEMA. Bruce Gillmer and Richard Godfrey are Executive Producers. Debbie Phillips and Chloe Mason are Producers.

ABOUT HUNGARY
HUNGARY is the official partner of the “2020 MTV EMAs.” As the iconic awards show is known to spotlight Europe, this year marks a historic “first” for the country. As an official partner of the MTV EMAs, fans will have a chance to get an inside look at four iconic locations within the beautiful, vibrant country during this year’s show.